Things have started making sense lately.  Issues and concepts I have had difficulty with in the past have started clicking and my world view is truly becoming my own (I think it has to do with the return of Saturn I previously wrote about). In the process of this growth, I have been pointed the direction of pop singer Katy Perry- hear me out on this one.

I mentioned in my March Tunes post about non stop listening to “Chained the Rhythm”, thanks to randomly hearing it when visiting the Parliament House in Orlando. After multiple listens to the song (and I mean literally on repeat), I went ahead and added Ms. Perry to my list of people I follow on twitter. A day later, she posted video of her speech at the Human Rights Campaign Gala.  I watched it and cried. She had the answer I was looking for- you have to step out of what you were raised in.

In her speech, Katy speaks about being raised in an uber conservative household and even performing Christian music. She shared how she broke out of that mindset, “Most of my unconscious adolescence, I prayed the gay away at my Jesus camps. But then in the middle of it all, in a twist of events, I found my gift and my gift introduced me to people outside of my bubble. My bubble started to burst.”

Throughout my life, the idea of LGBT issues had been seen as a no-no in my church background.  When I went to college, I had a few friends who were in the community and I spent quite a bit of time with. Even though I loved these people and didn’t see them as different from myself, there was always an issue inside of me when it was brought up at church. My viewpoint was “Hey, I’m not going to condemn you and tell you you’re going to Hell, don’t worry. I may not completely get what you’re doing, but it’s on you”.  Basically, I was, in church terms, lukewarm.

As I have gotten older, completed college, grad school and progressed onward in life, I had the same kind of feelings towards the LGBT community. I agreed that they should be able to marry when it came up and I definitely had some opinions that were more progressive than a lot of the folks I knew, but it was never really on the forefront of my mind and I never spoke up. Then Pulse happened. 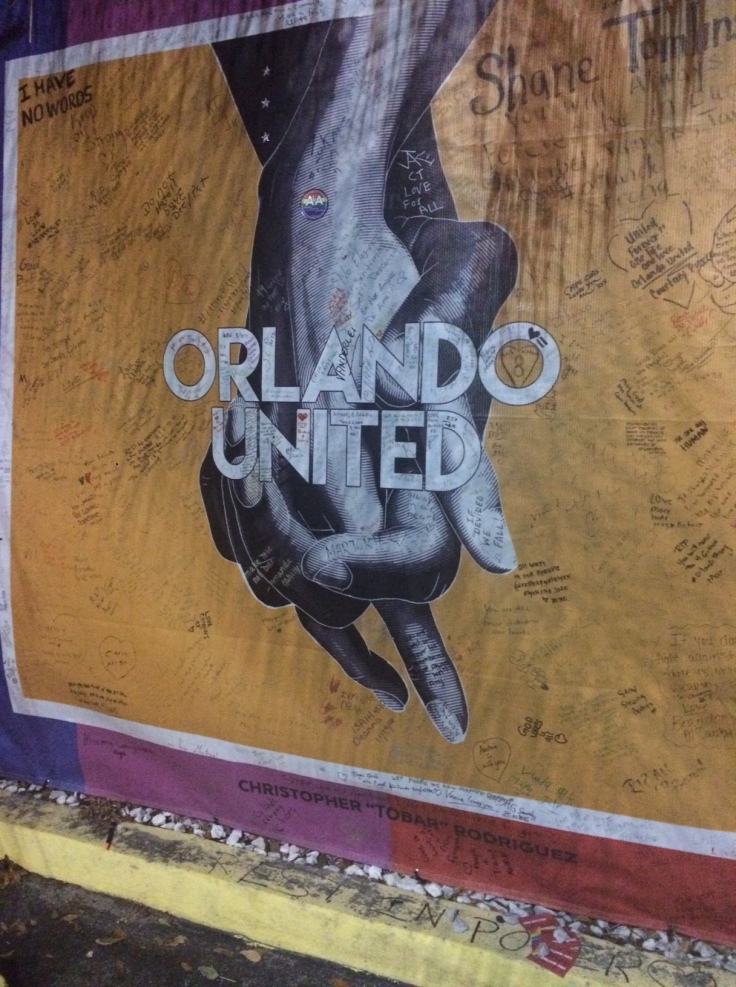 I have written about how much that tragedy in Orlando affected me and how I  was compelled to visit the memorial.  I mention in the post covering my visit, I woke up June 12, 2016 scared that my very good friend had been at the club that night. I was grateful that he had not been there.  Loss and I laid in bed and read the terrifying reports via twitter and other outlets before getting ready for church that morning.  We were both upset at the number of lives lost and I couldn’t imagine being there, waiting and waiting, to see if your loved ones and friends made it out safely.

I wore my bright scarf to church that morning, mainly because I didn’t own anything with a rainbow on it.  We sat in the back row and listened to the announcements and prayer requests. The church service was eventually over and not one person had as much as mentioned the Pulse events in a thought, prayer or anything. A week or two before, a policeman had been shot and killed somewhere way far off in the country and we had prayed three times about it. Three.

When I went to Pulse, I wore the same scarf I wore in memory of those people the morning after. It was one of the most important things I did on my trip to Florida.

When visiting Orlando, I saw so much of the LGBT community, saw the way people are so accepting and saw the celebratory nature of the community. The last night of my trip we went to the Parliament House and I had the most fun of my entire vacation. Everyone was super accepting, loving and inclusive. I was told I was beautiful more than once, complimented on my dress, danced with, hugged, smiled at- I was welcome and had an amazing time. I was with a group of people who were enjoying being themselves, taking a second to not take life too seriously and spreading happiness.

In her speech, Katy Perry talked about the inclusiveness she found in the gay community, saying they “were the most free, strong, kind and inclusive people I have ever met. They stimulated my mind and they filled my heart with joy and they freaking danced all the while doing it. These people are actually magic, and they are magic because they are living their truth.”

That night my bubble truly, officially burst and I was surrounded by magic. I can’t wait to return to and live in a city that is filled with so much magic and love and hope.

Saying these words outloud makes me so happy but also scares me some.  I am working on not caring what others think as much, but I know some people who I love may be put off by these words due to their religious beliefs. All I truly want to share is compassion, empathy, love and hope.  You have shown me much of this in my life and I want to truly spread this legacy- all the way around. I am ready to be an ally for all people and spread the love that is in my heart. Thank you. I hope to make you all proud.

As Katy says in the song,

So put your rose-colored glasses on
And party on”