I’ve made note before of how much I love Turner Classic Movies and the #TCMParty fun on Twitter but this year, my love for classic film has gone to a new level. Attending the TCM Big Screen Classics events throughout this year has been an extension of my TCM love and super awesome! 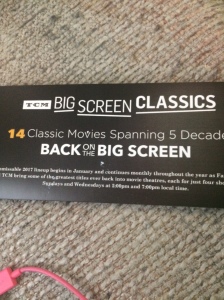 We attended some of the Big Screen Classics last year but lucked out and a friend passed along a link to purchase a year long pass for 2017’s film series. So, for $50 each, Loss and I have access to view 14 films this year on the big screen! Buying a pair of these passes was one of the best ideas I had in December of 2016.

Each film is opened with a short intro from a TCM host and is also punctuated with that same host sharing a few more tidbits about the film.  It’s pretty much what you’d see while watching prime time TCM films, but there’s something extra cool about seeing Ben Mankiewicz on the big screen (I’m super stoked to see my girl Tiffany Vazquez show up before the film next month!).

So far this year, we have seen Singin’ in the Rain (aka my favorite movie ever ever ever), An Affair to Remember, All About Eve, North By Northwest, The Graduate, and Smokey and the Bandit. Next week brings Some Like It Hot and thinking of Jack Lemmon’s face on the big screen just makes me excited (drag or not..he’s a classic film crush of mine, I mean, have you seen him in The Apartment? Perfection!).

I know some bigger cities have cinemas where they show these films on the big screen on a regular basis, but here in Chattanooga, we rarely have older films showing on the big screen. Thanks to TCM, this is possible without a two hour drive and I super appreciate it.

And did I mention the perk of having a built in date night every month that’s already payed for? Yes please!  Thanks for helping me nerd out and get some special time with the hubs as well!

One thought on “Things I Love: TCM Big Screen”