Well, well, well, it’s sure been a while for this blog, right? Well here I am again & I have a feeling we may be talking running a whole lot…

Time for a quick recap: In March of 2018, I signed up for the Princess Half Marathon at Walt Disney World for Febraury 2019. I took on running, did a good job training for quite a while & took on some races. I never got super fast, but I did the thing and I was proud. Fall & Winter hit, I completed 10 races in the TN State Park Tour series (more on this later) & wrapped up my races with a half marathon in the series on February 2. I made time at this race that was within Princess limits so I thought I was good. And I then admittedly got too stressed out over Princess & any training runs just stopped abruptly. I kept telling myself I could do it and well, I got most of it down. 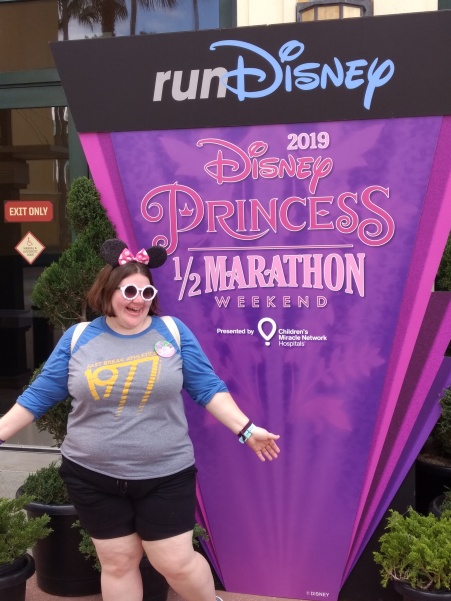 On to Princess Weekend- Loss & our friend Chris got down to Disney and settled. Friday we visited the Expo and as my first RunDisney event, I was super impressed with the entire process. Visiting the expo on day 2, later in the afternoon was a smart move, as the crowds weren’t bad at all. We grabbed a little bit of merch- I had to get a hat & the half marathon magnet- and character photos, I mean, MOANA! That was a definite exciting moment for this girl who loves her Disney characters. 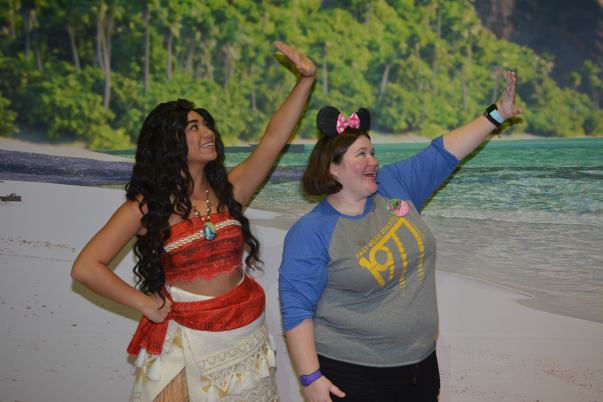 We spent what I later figured out was too much park time on Saturday but when it’s your first RunDisney race, this has to be a pretty common thing. But alas, we got to the room & in bed by 9:30 the night before &  were ready to go when the amazing race support queen, Holly, picked us up at 2:30 am. We were at Epcot, car parked & in line to enter the staging area at 2:50.  We walked in around 3 am & after setting up a meeting spot (that I never quite made it back to), Loss and Holly split off to try and get to Main Street and Chris & and I went for character photos. We got some shots with Princess Minnie, Aurora (who was on the half medal), Merida & Pocahontas and headed over to the corral entrance. We joined the masses and went to the F corral, getting far enough up we were in the second wave. Major props to RunDisney for keeping the entertainment going the entire time, even if it was the dj trying to get people dancing at 5 am.

We waited, we saw fireworks and then it was our time to go! Chris and I did the first mile together (including a potty stop after being in the corrals for an hour and a half) and he kicked it on up and headed out by himself- he knocked the race out of the park & I’m so proud of him! Even with a knee that started hurting part of the way through, he finished strong & is a total boss!

Running into the Magic Kingdom & down Main Street was pretty awesome & I had a hard time not getting choked up. I knew I had Loss, Holly & some other friends waiting on me near the hub with some more fuel & that magical moment. When I got to the end, I stopped maybe a minute, grabbed my peanut butter crackers & a Nuun refuel and trying to not cry seeing Loss. Regardless of what happens next in this story, this moment was worth it.

After some time running through the castle and grabbing a photo at the castle court, the second half of my race started. It got tough.

After the castle, we left the Magic Kingdom & went through some backstage areas then Cone Alley. I didn’t know what Cone Alley really was then I met it & was not a huge fan. Basically, picture a very crowded race squished into one lane of the road- that’s it pretty much.  This part was difficult for me & it was just really annoying. I sent Holly a text at Mile 7 saying I was done and ready to call it. She encouraged me to keep on it- I didn’t stop but I did have to hold back some tears as I walked past the Grand Floridian & Polynesian Resort entrances.

I took a photo of the 8th mile sign with the Incredibles & then the photos stopped on my phone. That’s when you know things are going down…

After talking to one of the Balloon Ladies & asking about possibly getting swept once in Epcot, she said there were no promises. I trekked it up the hill at mile 10- the hill wasn’t bad, it was the crowds and being in one lane of traffic- that’s tough. Did I mention the sun had come out pretty good before that point? At 10 they were giving out sponges soaked in cold water if that tells you how it was.

So I got to 11. I was literally one minute ahead of where they were sweeping folks, at the mile marker. I knew the next two miles would be people chasing me in Epcot & it was going to be the battle to end all battles. So I asked one of the ladies on the bike where to go to get on the bus.

I stepped aside & watched as they closed the course & saw way more people than I expected to get swept step aside onto the grass as we waited on the parade bus. I sat down on the guardrail with one lady and asked if it was ok if I patted her on the back then asked if I could give her a hug. She cried & made me tear up some as she said how upset she was. I did the best I could to remind her she got to mile 11 and that was so amazing- that is almost the whole thing- and it was HOT!

Once we got on the bus, I took the same approach & tried to remind the ladies & one guy around me how amazing they did on such a tough day. We all still got medals & we still did so much & that was reason to celebrate. I’m not sure how well my words helped but I tried- getting up at 1 am & walking/running 13 miles, well, getting 11 of those is pretty awesome.

When we got off the bus, we were given our medal & food boxes & drinks, then headed out to meet up with everyone else. I was Holly found me first & she let me cry on her shoulder for a few minutes. I’d done such a good job holding it back on the bus but it finally hit. After a couple of minutes, I was ok. I knew this one race did not define my success. I had worked for a year towards this day- I completed 3 other half marathons & 10+ road races in the process of getting to Princess. I figured out what these RunDisney races are: a celebration.

So I got my knees wrapped up with some ice (just a precaution…and it actually helped to not be hurting later) and got a few photos to celebrate. I hadn’t even planned on doing the “I Did It” photo but when I walked back through the area, I realized I had done it, like I said previously, I met my goal of getting to Princess. I know not everyone is going to agree with me taking these photos but I ran my race & I did it. And I’m super proud of myself.

Not much later, we hopped on the bus & headed back to the resort. I was happy to sit down for a while & get towards a shower but you can tell by the photos, I was in good spirits. I learned lots of lessons over the entire weekend and also on race day & made some awesome memories with Loss & some amazing friends.

After we got back to the hotel, we took a few pictures & started plans to come back in January for the Marathon Weekend Half Marathon for me to get my vengeance! (It might not be quite as crowded as Princess Weekend… a little bit…possibly. But probably not as hot for sure.)

What was a great way to celebrate? Biergarten with the crew that evening at Epcot!

Have you done a RunDisney race before? What did you think about it? Do you have a race you like the most?

6 thoughts on “My First DNF: Princess Half”